We all share the same landscape.  A crime against horticulture is, on some level, a crime against humanity and the country is awash with great examples,rural and urban. There are certain practices which , anecdotally, it seems nobody agrees with and which attract universal disdain. Yet they keep happening.

You would be hard pressed to find anyone who thinks that removing 100 metres of native hedgerow and replacing it with a post and rail fence and a spotted laurel hedge to facilitate the building of a bungalow is a good idea. The official justification for this has something to do with sight lines. Let’s talk about those sight lines after five years when the laurel has grown to the footprint of the original hedge and beyond. Should a planning application for a one off house which necessitates the removal of 100 metres of hedge be approved? I’m not so sure. There is a case to be made for giving preferential treatment to proposed houses which can be entered and exited safely by removing enough hedge for a gate, 3 or 4 metres. This seems logical to me. Go a step further and earmark some land for rural cluster developments where multiple houses are built together in the one field and accessed through a common entrance, thereby preserving road frontage. 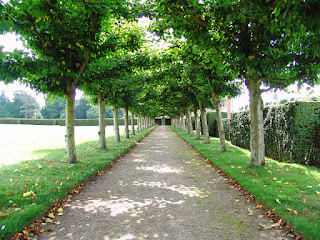 In towns and suburbs we really could use more imagination in how we plant common space. The default setting is a random scattering of Acer platanoides, Betula pendula and Aesculus hippocastanum which is only marginally better than nothing. Trees are invariably inadequately staked resulting in demented growth trajectories which ultimately create hazardous situations. As far as the green areas themselves are concerned it is currently acceptable for a developer to “round out” whatever excavated material happens to be left at the end of the construction and call it green space. We need some oversight of these guys to ensure that they remove sufficient material to create a level space on which children can safely play. We don’t need Brendan  the JCB driver’s reimagining of Newgrange and, if we are serious about socialising them through outdoor play, the kids certainly don’t need it.

Wouldn’t it be nice to see pleached trees, formal planting, Lime Walks, Beech Walks, Poplar Avenues? There are times when an older suburban setting exudes a positive energy the source of which you can’t quite put your finger on. And then it dawns on you; the mature trees shrouding the locality in class.  Take the quantity of trees currently being planted in a blunderbuss approach and apply some craft, some coherence of vision and you very easily arrive at a more interesting landscape. A more interesting pan generational landscape with something for everyone.

Allotments are criminally underused. In Ireland the allotment is typically in a fenced off corner of a farmer’s field on the edge of town. Out of sight and out of mind. What’s wrong with putting our allotments front and centre, who says the humble head of Cos lettuce can’t be the star of the show? Allotment culture is strong in the U.K. where its power for social good has long been understood and developed. We mentioned the vast tracts of badly contoured “green” space that housing developers are so fond of leaving in their wake. Who would miss a few hundred square feet off the corner of one of these prairies of blandness to redeploy as allotment space? A ten by ten foot postage stamp  is perfectly adequate to establish a modest vegetable and fruit garden and in the process kick start an appreciation of the organic in all members of the household. Throw in the beneficial side effect of propelling social contact between neighbours  and you have the proverbial no brainer.

Preserve our hedgerows, plant more trees, grow food together. What’s not to like?